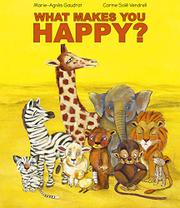 WHAT MAKES YOU HAPPY?

A discussion starter offering contrasting answers to the titular question.

Children are likely to find their thinking more muddled than clarified by this set of scenarios, as—whether due to poor phrasing in the original French or awkward translation—the alternatives are often inscrutable or nonsensical. The confusion begins with the title, which is transformed to “What Makes Us Happy?” on an inside gatefold. Either way, the question is addressed in a series of broadly brushed scenes featuring an array of familiar animals with human expressions acting in anti-social ways on the left and, beneath further gatefolds on the right, more cooperatively. Thus, to use one of the less-obscure examples, the alternatives “Keeping everything for yourself? // Or sharing what you have?” caption views of a duckling depicted first clutching a basket full of lollipops, then handing them out. At other times, though, readers are invited to decide between “Being better than others // Or doing well with others”; “Being protected from all dangers // Or daring to jump and have fun”; “Using something until there is no more” (a monkey gulping down a pile of bananas), or (said monkey training a garden hose on a few banana plants) “taking care of things so we can keep enjoying it” (sic).