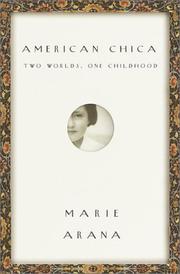 Expressive memoirs of a Peruvian-American girlhood, by the editor of the Washington Post Book World.

Arana, daughter of a Peruvian father and an American mother, sees herself as a hybrid, a fusion of Latina and Anglo, embodying both cultures but an outsider in each. Growing up in Cartavio, a W.R. Grace company town on the coast of Peru (where her father was an engineer) in the 1950s, the author was surrounded by native servants who filled the observant and impressionable child with magical legends and tales of fearsome spirits. At the same time, she was being schooled at home by her no-nonsense mother with textbooks ordered from the US. In 1956, when her American grandmother was dying, the family spent three months in Wyoming. There Arana, not yet seven, met her all-American relatives, learned to shoot, chew tobacco, and spit, and encountered racial segregation for the first time. Back in Peru (this time in Lima) and once again a member of the upper class, she fooled the administrator of the American school there into assigning her to the Spanish-speaking classes (where she made fun of the Anglos), but out of school she played American street games with her older brother. In 1959, the family moved to New Jersey, and the author describes herself slipping in and out of her cultural identities there, choosing when to be Peruvian and when to be American. Within this winning portrait of a bicultural childhood are a host of notable characters—the mysterious Peruvian grandfather who stayed in his upstairs room for 20 years, the tradition-bound Peruvian grandmother who ruled the family, the young gardener who taught Arana about her soul, and (most of all) her parents, whose difficult but enduring marriage is at the very center of her story.

A rich and compelling personal narrative.