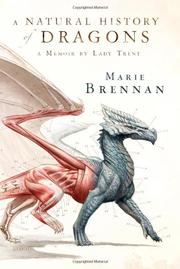 A NATURAL HISTORY OF DRAGONS

A Memoir by Lady Trent

New Victorian-feminist fantasy and first of a series, from the author of the Onyx Court tales (With Fate Conspire, 2011, etc.).

At a tender age, Isabella, daughter of Sir Daniel Hendemore of Scirland, becomes fascinated by dragons and devotes hours of study to sparklings, tiny flying creatures regarded by most contemporary naturalists as insects. In an age when educating girls in science and philosophy is frowned upon, Isabella finds information hard to come by. Once of age, her father insists she marry; luckily, she finds Jacob Camherst, the son of a rich local baronet, not only handsome and charming, but also passionate about dragons. Jacob is willing to indulge her thirst for knowledge and defy convention—in private. But then Isabella’s talents come to the notice of Lord Hilford, a famous naturalist and explorer, who astonishingly consents to her joining the expedition he’s currently organizing to Vystrana in search of rock-wyrms. Eastern European–flavored Vystrana is cold, damp, mountainous, primitive and impoverished, and the locals are far from welcoming. Worse, before they even arrive at the remote village where they will sojourn, they’re attacked by a dragon! Since Vystrani dragons aren’t noted for their bellicosity, overjoyed if rather shaken Isabella resolves to investigate. This isn’t the first such attack, the locals reluctantly confide; smugglers operate in the area, and perhaps other nefarious activities occur that the Vystrani refuse to admit. There are clues, however, and nothing daunted, Isabella starts to put them together. Told in the style of a Victorian memoir, courageous, intelligent and determined Isabella’s account is colorful, vigorous and absorbing.

A sort of Victorian why-what-whodunit embellished by Brennan’s singular upgrade of a fantasy bromide and revitalizingly different viewpoint.