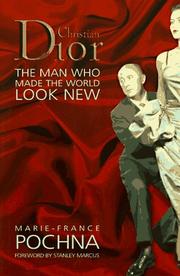 The Man Who Made the World Look New

European-celeb biographer Pochna writes a serviceable history of Christian Dior on the 50th anniversary of the ``New Look.'' In February 1947 Dior launched a postwar fashion revolution, dubbed the New Look by Harper's Bazaar. Dior, 42 when the first collection was shown, was a late bloomer. Not fashionable-looking at all, he was a chubby, bald man (he once escaped a Chicago train station filled with angry demonstrators awaiting his arrival because he didn't resemble anyone's idea of a fashion arbiter). He was born in Normandy to upper-middle-class parents who made their fortune manufacturing fertilizer. He disappointed his family by having no aptitude for their business, and sadly, they did not live to see him become the first couturier to make millions licensing his name. Dior spent an exhilarating youth mixing with the revolutionary artists of 1920s Paris. During the Depression, when his father lost his entire fortune, Christian began to work as a fashion illustrator and designer. After the war, he was bankrolled in his own house by the textiles billionaire Marcel Boussac. Dior envisioned ``a very small, very exclusive house . . . going back to the great traditions of luxury in French couture.'' He wanted to design for a few elegant, exquisite women, and after the deprivations of war, he wanted to make women beautiful again. Pochna uses the present-tense and lots of exclamation points to re-create the excitement of the debut showing, when the world first saw his tight bodices, wasp waists, and skirts made of 40 yards of material. The book is marred by repetitions and some contradictions (e learn three times, for example, that Dior's mother would have hated to see his name in front of a shop). Pochna exhibits a personal charm that must have helped win her some difficult interviews, but the bio often seems disjointed and unpolished. (32 pages b&w photos, not seen)