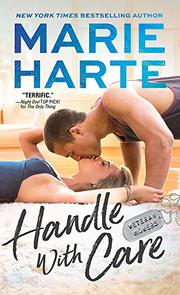 A woman raising her teenage brother is afraid to take a chance on love.

Kenzie’s parents died when she was 20, leaving her as guardian of her 2-year-old baby brother, Daniel. For the past 11 years, Kenzie has struggled with the weight of too many responsibilities: Trying to finish school while raising Daniel, taking care of the aging home they inherited, and keeping her small business alive. Evan Griffith is an accountant and partial owner of a moving company called Vets on the Go! He is burned out from the stress of working at a high-powered accounting firm and decides to help his short-staffed company by temporarily working on a moving truck. This is the third book in the Movin’ On series by Harte (Smooth Moves, 2019, etc.), and new readers might be overwhelmed by the continuing characters and plotlines from previous books. Love has not been kind to either Kenzie or Evan, and their instant physical attraction scares both of them. Kenzie was heartbroken a year earlier when her boyfriend suddenly broke up with her, leaving both her and Daniel feeling miserable and abandoned. She relies on the love and support of her two best friends to help her recover but pledges never again to trust a man with her heart. Evan hasn't seriously dated since his fiancee died of cancer, but he feels confident that Kenzie is “the one.” There is great potential when two emotionally wounded souls meet each other, but instead their romance circles aimlessly. Kenzie is so afraid of being hurt that she pulls back after every baby step toward love, while Evan waits patiently for her to overcome her fears.

Too slow-moving to satisfy.