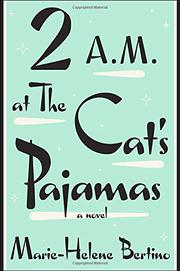 Bertino, who won the Iowa Short Fiction Award for her collection Safe as Houses (2012), aims to pull heartstrings in her first novel, which is set in Philadelphia and follows a cast of cute/quirky characters hour by hour as their lives converge two days before Christmas.

Fifth-grader Madeleine Altimari is pretty much raising herself; her father has retreated into his bedroom in a drug-induced stupor to numb his grief since the death of Madeleine’s mother—a strip-club dancer and free spirit beloved by all who knew her. Madeleine is lonely, precocious and sassy, her tough exterior hiding her own heartache. Mrs. Santiago, the warmhearted widow who runs the neighborhood cafe, provides breakfast, lunch and grandmotherly affection, but Madeleine has no friends at her Catholic elementary school. Her solace is singing—she’s a natural who yearns to be a jazz singer. Madeleine’s day begins badly when Principal Randles, who resented Madeleine’s mother even when they were kids, first deprives Madeleine of a solo at the school’s morning Mass and later unfairly expels her. (A school in session on Dec. 23 and a principal expelling a child without some kind of parent meeting both hint at less-than-realistic storytelling.) Then Madeleine learns there's a jazz club in Philadelphia and decides to find it. Madeleine’s teacher, Sarina Greene, who also frequents Mrs. Santiago’s cafe, feels terrible about Madeleine’s expulsion, but what can she do? Besides, she’s coping with her own crisis: Having returned to Philly after a divorce, she's been invited to a dinner party with old friends, including a former boyfriend. Meanwhile, across town, the police warn Jack Lorca that he'll have to close his jazz club, The Cat’s Pajamas, if there are any more code violations. But he’s promised to let his musically talented, teenage (i.e. underage) son play in the house band tonight. As the hours pass, the various storylines thread together.

While some will find this seasonal sweetness charming, others will find it maddeningly contrived.