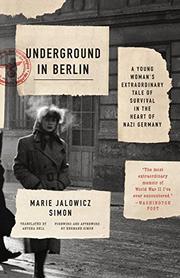 Simon’s son gave her a tape recorder, and the result is a crisp, detailed memoir of her years as a U-Boat (“those who had gone underground in the Nazi period”) in World War II–era Berlin.

A Berlin-born, comfortably raised Jew, the author at first tried to cooperate, working as forced labor at Siemens. However, she well understood that for a Jew in Germany, there was no future. Her stories of sabotage of the nuts and bolts they built for Siemens show a people strong and clever enough to fool their captors. From the beginning, Simon relied on the help of Dr. Benno Heller, a gynecologist who connected her with those who would hide her. (Heller was imprisoned in Berlin, deported to Auschwitz, and ended up in Lieberose-Jamlitz, where he was last seen in early 1945.) The author’s story of sitting quietly in a wicker chair so as not to alert neighbors to her presence was not a one-time thing but rather a constant as she hid in attics and half rooms. A large part of her story is hunger. Nearly everyone in Berlin was hungry, and Simon stayed with people who couldn’t, or wouldn’t, give her food. Her story is emotional, but her narrative is not. She discusses rapes, whether by a “protector” or Russian liberator, almost as asides or inevitabilities. One small ray of hope was her attempt to immigrate to Bulgaria with false papers to marry, though she eventually ran into the ubiquitous Nazi bureaucracy. She did have luck, especially with the Koch family, who supplied her with food and support throughout, and during a two-year respite in 1943, when she stayed with a woman named Luise Blasé. The book also includes a helpful “Index of Names.”

A coolly told story of a harrowing time and a young woman’s struggle to survive.