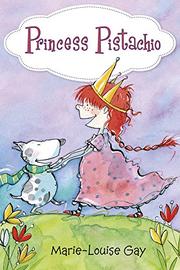 From the Princess Pistachio series

The arrival of a tiara in the mail is the tipping point in evidence for Pistachio Shoelace that she is really a princess—but no one seems to believe her.

In five short and humorous chapters readers learn that Pistachio has long believed that a “ghastly witch, green with envy” stole her, the Papuan princess, and allowed her adoption by Mr. and Mrs. Shoelace of 23 Maple St. Pistachio attempts to dress and act the part of her ideal, pampered, “real princess”—but no one, including her mother, plays along. When she tries to avoid looking after her baby sister, Pistachio’s mother only tells her that princesses “always obey their mothers, or they go without television for a week.” And her best friend, Madeline, actually laughs at Pistachio’s sudden, unexpected costume and behaviors. The skillful combination of text and illustrations addresses many serious concerns of early childhood—and even of parenthood—without straying from the book’s tone of fun and frivolity. (Among the issues so adeptly addressed are adoption, sibling relationships, classmate rejection and a missing child.) The characters are pen-and-ink creations tinted with bright watercolors; Pistachio’s russet braid and freckled face are reminiscent of Pippi Longstocking and the author’s own Stella. Whimsical names (Pistachio’s teacher is Mrs. Trumpethead) add to the fun.

A playful and entertaining take on children’s perennial questions surrounding ideas of personhood, family and community.