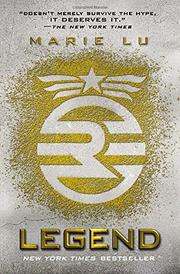 From the Legend series, volume 1

Fifteen-year-olds June and Day live completely different lives in the glorious Republic. June is rich and brilliant, the only candidate ever to get a perfect score in the Trials, and is destined for a glowing career in the military. She looks forward to the day when she can join up and fight the Republic’s treacherous enemies east of the Dakotas. Day, on the other hand, is an anonymous street rat, a slum child who failed his own Trial. He's also the Republic's most wanted criminal, prone to stealing from the rich and giving to the poor. When tragedies strike both their families, the two brilliant teens are thrown into direct opposition. In alternating first-person narratives, Day and June experience coming-of-age adventures in the midst of spying, theft and daredevil combat. Their voices are distinct and richly drawn, from Day’s self-deprecating affection for others to June's Holmesian attention to detail. All the flavor of a post-apocalyptic setting—plagues, class warfare, maniacal soldiers—escalates to greater complexity while leaving space for further worldbuilding in the sequel.

This is no didactic near-future warning of present evils, but a cinematic adventure featuring endearing, compelling heroes