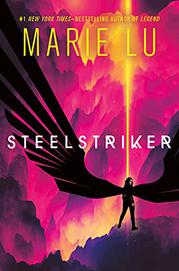 From the Skyhunter series, volume 2

A group of young rebels struggle against tyrannical forces in this sequel to Skyhunter (2020).

Resuming the tale shortly after the fall of Mara, the last nation that had been holding out against the murderous Karensa Federation, the story is vividly told in the first person alternating between Talin’s and Red’s perspectives. Talin, who uses sign language to communicate, has now been forced by the deeply evil Premier Constantine, as Red was, to become a Skyhunter, with huge metal wings grafted onto her body, steel armor implanted under her skin, and her emotions accessible to him. Constantine uses the threat of ending her mother’s life—he holds her captive—to control Talin, thus ending her ability to work with her friends against Karensa. The menacing Constantine is an effective villain whom readers will rail against as Talin and Red slowly discover the complicated web of burgeoning resistance and betrayal that exists in the bleak new world they inhabit. Detailed sabotage plots, action-laden fights, and even some romance are interspersed, but Talin’s psychologically taut internal battle against Constantine’s suffocating control is front and center throughout. The novel wraps up with a satisfying conclusion. The first novel noted characters’ differing skin tones; there are several secondary characters who are queer.

A slow-burning, introspective end to an emotionally powerful duology.