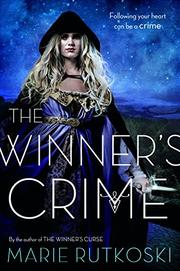 From the Winner's Trilogy series, volume 2

The middle entry in a fantasy trilogy brings new players to the game while exponentially raising the stakes.

Lady Kestrel has successfully bargained for limited independence for the Herrani people, but only at the price of her own freedom. Now betrothed to the feckless Imperial heir, she risks even more as a spy, while managing to convince everyone—most particularly Arin, once her slave, then her captor, now governor of Herran—of her ruthless devotion to tyrannical Valorian dominion. The twisty plot is a cleverly constructed puzzle box of intrigue and deceit, couched in graceful prose that shifts from restrained to voluptuous. The diversity both between and within the various cultures suggests a richly detailed world; yet as the fate of peoples, kingdoms and empires hangs in the balance, the conflict plays out at the most intimate personal level in the reluctant, dangerous, impossible attraction between Kestrel and Arin. Her ferocious intelligence and his blazing integrity demand sympathy and allegiance even when the intense yearning, distrust, rejections and betrayals become almost too painful to bear. As positions harden and blood is shed, their destruction at each other’s hands looms ever more certain; but a desperate hope that somehow disaster can be averted propels readers to the final devastating page, leaving only the excruciating wait for the sequel.