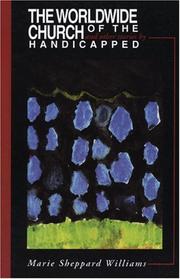 THE WORLDWIDE CHURCH OF THE HANDICAPPED

Williams, who was a social worker for 20 years, creates a self-modeled protagonist in this debut collection—a semiautobiographical gathering of 15 interrelated stories. The author has an ultracasual, conversational tone and a quirky sense of humor that infuse the best of these pieces; when her wit and low-key style fail her, though, the pieces seem merely didactic. The first, the title story, introduces the narrator, Joan, and her best friend Evangeline ``Vange'' Kuhlman—both social workers at a rehabilitation agency for the blind. The special friendship between the two becomes a focal point of the tales; the theme of universal disability becomes another, as Joan, who, among other things, suffers from tendinitis, respiratory problems, and insomnia, and Vange, who is blind and obese, triumph over their personal obstacles to help others understand that a handicap is only a handicap when you allow it to be one. ``Miracle'' is more a musing than a story (which Williams herself points out in another, referential piece), this concerning Joan's distaste for dwarves, who ``freak [her] out.'' More successful is ``Ho-Ghay-Loo-Ees-Bor- G-Hais,'' a both literary and clever piece in which the narrator/author manages to make Borges accessible and comprehensible in just a few brushstrokes. In the concluding story, ``Book of Dreams,'' however, Williams goes sappy with strained folksy references to Pete Seeger, Joan Baez, and Woody Guthrie (``All of the secret dreams and their dreamers clasp hands in a long chain . . . and we dance''). The overarching theme is clearly that all of us are handicapped in some way, and that it's wisest to accept our traits, no matter how ``society'' perceives them, and embrace them as essential to our true selves. The line here between fiction and autobiography is too often blurred, with Joan seeming more mouthpiece than fleshed-out, convincing character.