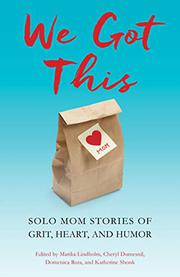 In 2015, Lindholm, a contributor to and one of four co-editors of this collaborative debut anthology, founded Empowering Solo Moms Everywhere, a social platform and “informative community for single moms, who currently raise 22 million American children.” This was the genesis for this collection, which seeks to eliminate the stigma of solo motherhood by combatting outdated stereotypes. Along the way, the essays show the writers’ grace, their humor, and even their mistakes. Readers will find some of the authors’ names familiar, although their stories may not be. Ariel Gore, the award-winning writer and founding editor of the periodical Hip Mama, shares lies that she told in the Sonoma County welfare office in order to keep both her child and her creativity alive. Iraqi writer Faleeha Hassan recalls fleeing her home country after appearing on dangerous militants’ “death lists”; in Turkey, she struggled to enroll her children in school—not just for their education, but for the warmth that their unheated apartment couldn’t provide. Amy Poehler of Parks and Recreation fame breaks down divorce with heartbreaking and sidesplitting hilarity. Among these and other well-known names are emerging writers, poets, and performers. They include writers with ties to ESME, authors of color, military mothers, and LGBTQ parents and those who were raised by them. The well-curated collection is divided into seven chapters with strict, but never restrictive, themes, such as raising children, seeking help, and dating while single. Readers will be able to revisit these essays for laughs, inspiration, or a cathartic cry.

An engaging tribute to the heart, soul, and ingenuity of solo moms.