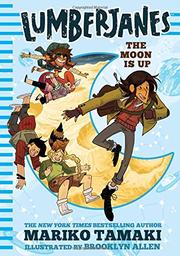 THE MOON IS UP

From the Lumberjanes Novels series, volume 2

The scouts of Roanoke cabin return for new sleep-away-camp shenanigans.

At Miss Qiunzella Thiskwin Penniquiqul Thistle Crumpet’s camp for Hardcore Lady-Types, girls are preparing for campwide Galaxy Wars, a space-themed competition. The inhabitants of Roanoke cabin—Mal, Molly, April, Jo, and Ripley—feel the pressure to be victorious, and not just in the contest. Science-loving Jo has received an offer from a prestigious astronomy program that would mean she would have to leave her friends and all the fun behind; musical Mal is having trouble passing the multi-instrument test to earn a Tha’s Accordion to You badge and begins to question her tuneful talents. Meanwhile, scrappy Ripley befriends a cheese-obsessed, talking mouse with a secret. As their own anxieties mount and the pressure to win Galaxy Wars intensifies, will the girls be able to handle it all? This second volume in the middle-grade series maintains all of the best elements of both its prose predecessor and its comics roots, from its zippy signature argot (bons mots such as “Where the Roxane Gay are you going?”) to a diverse cast of characters. Out of the five main protagonists, three are girls of color (although not explicitly stated in this volume), and two of them—Mal and Molly—are a harmonious and supportive couple; a secondary character at the camp is nonbinary. In today’s highly competitive world, the insistence that having fun trumps winning is a delightful departure.