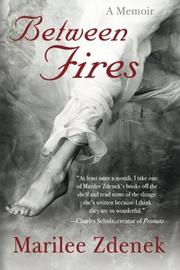 A woman’s triumphant tale of her struggle to rebuild herself after a disaster.

“They say that men fall in love through their eyes and women through their ears and there’s probably some truth in that,” reflects Zdenek (The Right Brain Experience, 1995, etc.) in this powerful memoir. The Santa Ana winds of 1961 blew fiercely and mercilessly through the author’s neighborhood in California, bringing smoky gusts of flame and winds. She managed to escape with her two small daughters, Gina and Tamara, as her home burned to the ground, destroying everything inside. Marilee couldn’t reach her husband, Leonard, and the day passed in agony until he showed up at the motel where she and the kids were staying. Her relief at having him back intermingled with her devastation at the loss of their home, despite Leonard’s gentle reminder that “It’s just things that burned.” Surrounded by her loved ones, the author hoped that the worst was behind her—but less than three weeks later, she awoke to the terrifying sound of Leonard gasping for breath. He died hours later, and at 27 years old, the author was a widow with two small children. Her love for Leonard, an older man who’d been married before, was one that she never believed she’d have again. But not long after his death, she met Al, a kind, caring man whose affection healed her wounds. They were married for 45 years before he died, once again leaving her brokenhearted, but she concluded once more that “We cry, we grieve, we move on.” Zdenek’s perspective on her life is uplifting and inspiring, despite the often tragic content of her story. Her exceptional prose will draw readers in as they wait to see how she will survive her many tribulations. The people in Zdenek’s life emerge as flawed but endearing characters, and the love she feels for them is apparent and moving; for example, regarding her grandmother, she writes, “When I’m in my eighties and nineties, I hope I can live as creative and constructive a life as those I’ve written about here.” Her memoir captures love, loss, and renewal in a way that will touch anyone who has been through those challenges.

A memoir that captures the opportunity that lies in loss.