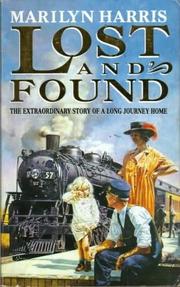 Harris's penchant for lassoing the casual reader with a far- fetched yarn—even one with vacant characters and cuckoo coincidences—has boosted the popularity of her period Eden series and the chill-factor of ghost/terror items like The Diviner (1982) or Night Games (1987). This is a sunnier item, with a runaway plot, about a two-decade search for a child lost on a westbound train from Depression-era Tulsa. In 1930, the 18-year-old Martha, who's run away from a mean dad in Texas, pleads with the harassed head of a Tulsa Salvation Army shelter, where she slaves, to allow her to keep the newborn she names Belle (for the baby's bell-shaped birthmark) as well as R.C., the waif she's found tied to a lamppost. Then one day when Belle is but a tot, R.C., thinking he'll save them from an orphanage, puts Belle on a train but misses it himself. In grief and fear, Martha and R.C. begin the search. Switch then to Belle and her fortunes—and families both cold and marvelous. Belle finds her ``real'' family with a Japanese couple, from whom she's later forced to part when they are interned during the war. At the same time, Martha and R.C. are having rocky times, but eventually Martha will have a home and a houseful of rescued waifs—as well as a husband—in Texas. It's while R.C. is teaching at UCLA that the impossible dream comes true. Meanwhile, Belle, now a widow and a student of economics and finance ready to take over her late husband's celluloid empire, and involved in civil-rights work, is ripe for discovery. Your basic seek, find, and sunburst resolution tale with an eerie period ambiance and Hallmark characters.