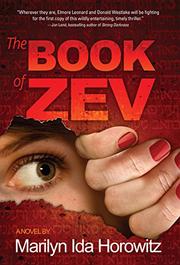 A strange brew of characters converges to save the world in a story about two Jews suffering from religious crises and finding answers once they cross paths.

Though this is billed as a “black-comedy thriller,” Horowitz incorporates neither comedy nor thrills in this monotonous outing. The story opens by introducing Gwydion, a psychic who confers with an angel that could pass for his twin; worries about what Iran’s murderous leader, the nefarious Zarafshan, is doing; and can't die. Meanwhile, red-haired, divorced Sarah, a kosher chef in New York who spends her free moments practicing yoga whenever she’s not actively hating God, compares her life to that of the Little Match Girl. Swimming in pity, but taking time to admire her own reflection in the mirror, Sarah is swamped in bitterness over losing her childhood cook and nanny, Sylvie. While she stews about the state of her existence, Zev, who occupies his moments at a wedding avoiding his parents’ efforts to marry him off, imagines himself in a Nazi uniform, forcing one of the pretty girls attending the nuptials to have sex. After nearly being killed by a falling construction beam, Zev spends many chapters sleeping and questioning his own life, while Sarah contemplates existentialism. They both hook up with Gwydion, who brings them together to stop Zarafshan following the revelation of an amazing coincidence. Horowitz fluffs up a bizarre and flimsy plot by padding the exposition with minute descriptions of all the characters and their wardrobes.

What this tale needs aren't references to films, biblical passages or philosophic babble but relevant, interesting characters, believable dialogue and an intelligent plot that doesn’t rely on coincidences.