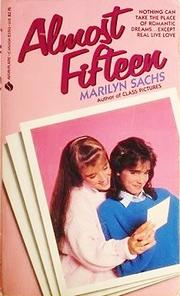 Prolific Sachs is adept at depicting the tribulations of younger teens as both poignant and comic, Imogene should interest readers both by her individuality and by her universal experiences. Imo is the only child of two quintessentially improvident parents. Dad's a photographer who rarely sells a print; Mom's a perpetual student. With the help of royalties from a successful cookbook written by a deceased relative, Imo keeps the family going in spite of their charming insouciance. Meanwhile, she tries to comfort herself for the fact that her boyfriend broke up with her just before she could break up with him, by having a crush on the new tenant upstairs, handsome Adam Derman. Baby-sitting for his son, she has ample opportunities to observe the parade of pretty, empty-headed women in his life, but fails to notice that his notions are both sexist and rigid. Friend Melissa tries to match Imo with Leo, but just as Imo decides to give him a try, Melissa snags him herself. Still, there's hope that love will bloom with the nice boy Imo has met at the allergist's office. It isn't so much what happens in a Sachs book—it's the way her characters bubble into life as one effervescent, sharply observed incident follows another. A fine alternative to mass-produced romances.