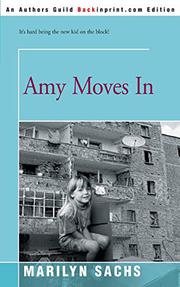 When Amy Stern and her family moved to their new flat she was so uncomfortable in her position as a newcomer she almost volunteered herself as a permanent steady ender on the jump rope of some neighboring children. Nine-year-old girls will recognize in her impulse the bottomless depth of Amy's desperation. The trouble with being a nine-year-old girl is that it takes most of the tenth year to get over it. The author follows Amy through her years of trial in a way that shows she's been there. The family scenes have the reality of relatives as they are rather than as the articles on child psychology that Amy's mother reads would have them be. The financially solid Uncle patronizes Amy's father, a very good man who has changed jobs often. The aunt, who comes to stay while Amy's mother is hospitalized after a fall, loves her nieces dearly, has lost all sympathy with children and her housecleaning is an heroic war in which Amy and her older sister often get swept aside. Amy, in her relationship with Laura, who is two years older, is the perfect rendering of the continuously irritated but ineradicable fondness of siblings who must share a bedroom. Amy learns to find her way through the social structure of the 4th grade, which will always be more arbitrary than that of cafe society, and reaches the stage where she can see sticking to her principles as more important than companions to walk home with. This is a very funny book that still offers readers valid insights into people and their behavior. Set near the and of the Depression, it is true to its time and true to the unchanging conditions of childhood.