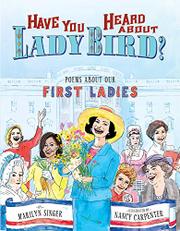 HAVE YOU HEARD ABOUT LADY BIRD?

Poems About Our First Ladies

“We know Eleanor Roosevelt, Abigail Adams, / but what about those other madams”?

For each first lady from Martha Washington (“Raised to be a planter’s wife, / taught how one behaves / as mistress of the household / and the household slaves”) to immigrant Melania Trump, Singer offers a thumbnail character study in verse that’s paired to an ink-and-wash figure by Carpenter. If there is any common theme, it’s mortality: Martha Jefferson, who died 19 years before her husband’s election, is represented by a framed silhouette over a silent pianoforte; Peggy Taylor lies prostrate before a tombstone; a veiled Jackie Kennedy looks out from an antique TV screen. Singer likewise often includes mention of lost husbands or children among references to favored causes and personal accomplishments. On the other hand, Mary Todd Lincoln, generously summed up as “an unlucky woman—kindly and cursed,” poses regally as her brown-skinned dressmaker (unnamed in the poem but identified in the endnotes) cuts up an American flag to make a gown while Abe stands nearby, gaping comically at a sheaf of bills. Brief profiles at the end add some detail but mostly just recap the poems’ content, and a pictorial timeline on the rear endpapers would serve as an index if the jacket flap didn’t cover a good portion of it.

Some issues with design and tone but a mostly worthy appreciation of the women who stood and stand (if, sometimes, only figuratively) next to the presidents.