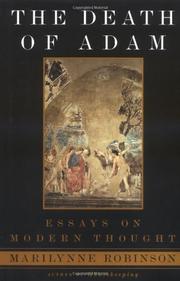 THE DEATH OF ADAM

The author of Housekeeping (1980) and Mother Country (1989) challenges the accepted views of Calvin, Darwin, and others to invigorate intellectual discourse and, by extension, change our days and minds. As with her earlier works, Robinson’s essays are marked by her uneasiness with the workings of society and human consciousness. Here she attempts to counter people’s disturbingly easy acceptance of the “prevailing view of things” by taking a “contrarian” approach that assumes any side—in fact, each—may be wrong. Her aim is not to ridicule but to provide alternatives: “Put aside what we know, and it will start to speak to us again,” she says. Her essays on John Calvin revisit his contributions to modern government and religion, disputing Max Weber’s views of Protestantism and uncovering the influence of Renaissance writer Marguerite de Navarre. With the Mencken-inspired title “Puritans and Prigs” she traces the “generalized disapproval” of Puritanism to today’s self-congratulatory priggish eating of fish and correcting of offensive diction. The book’s title refers to the consequence of Darwinism, that is, the usurpation of God and human impulses by hard-wiring. As with all good philosophical essays, these pieces do more than shape thinking. They—re about life as it’s lived now. Like the 19th-century reformers she so appreciates in “McGuffey and the Abolitionists,” the author wants to engender good faith. When what passes for social criticism these days is issue-bound journalism, and when intellectual debate is largely confined to ivy halls, Robinson’s laboriously researched, inclusively presented opinions are welcome. They serve scholarship well, enlarging the audience for dialogue on broad questions of how to live. Her dogged textual dissections (e.g., of Lord Acton and other critics of Calvin) illuminate her readings; her epigrammatic observations (e.g., ’spiritual agoraphobes—) vividly capture our states of mind. Set aside Robinson’s occasional sober prolixity and find a moral gauntlet. This is a book written in hope.