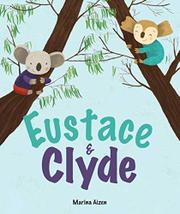 Two koala bears look for a new home that’s a little less crowded and noisy, but the search isn’t so simple in Aizen’s (Mary Had a Little Lamb, 2013, etc.) newest picture book.

Eustace and Clyde are very different koalas: Eustace loves eating lots of leaves and spends most of the day “lazing on branches,” while Clyde is not so fond of leaves and “has no time for lazing on branches.” Despite—or perhaps because of—their differences, Eustace and Clyde are the very best and closest of friends. They live together and share a life, and when their treetop neighborhood proves too crowded, they go in search of “the perfect place for a koala pair.” They look at several new homes—one too cold, one too hot, some already occupied—and none fit quite right, so the pair happily settles back where they started, among friends and with each other. Despite characters and art seemingly attempting to follow in the steps of such landmark books as And Tango Makes Three, the attempt at LGBTQ representation is slightly undermined as the text explicitly and almost immediately identifies the koalas as friends. On the other hand, Aizen deploys a light but sincere narrative about a close, caring male friendship—a representation that’s also lacking and worthy of visibility—to gently poignant (if perhaps unintended) effect among playful illustrations.

Warm and cheerful with just a dash of house-hunting entertainment.