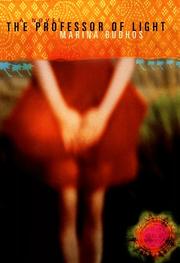 THE PROFESSOR OF LIGHT

To paraphrase Henry James, the complex fate of being physically estranged from one’s homeland, while simultaneously bound to its culture, is explored with feeling in this intense fictional portrayal of “a funny, in-between family, Indian, Caribbean, English, American.” Their members are Warren Singh, a Guyanese of Indian ancestry, his Jewish-American wife Sonia, and their daughter Megan, who narrates the story of Warren’s breakdown and the family’s gradual fragmentation during their several summers in England. Warren, a philosophy professor, is, furthermore, a scholar compelled by his own intellectual hunger’specifically, to seek an understanding of light’s paradoxical nature: is it particle, or wave, or both? As Megan senses her father’s restless mind “trying to draw the circuit of my thoughts tighter, to him,” she also understands that his studies form a distancing device separating him from the ingenuous semi-literacy of his needful Caribbean relatives, whom he nevertheless can—t force himself to abandon. Budhos (House of Waiting, etc., not reviewed) explores this contradictory state fruitfully, creating both a powerfully enigmatic, indirect characterization of the beleaguered father and a persuasive network of exfoliating consequences—including the indignant reactions of the Singhs’ relatives (and hosts) in England, the “liberation” of Sonia in unillusioned middle age, and Megan’s credibly indecisive wavering between the seductive clamor of ordinary life and the thrill of intellectual discovery that her father’s imposing spirit seems to promise. The story, though, is underplotted, and once Megan reaches adolescence, the terms of those conflicting claims are too often repeated, dramatized unconvincingly by the episode of an all-too-symbolic fire set in a library. That said, there’s much to admire in this intriguingly meditative novel, and satisfying closure offered by Megan’s final realization: that [both] “particle and wave, we must try to hold fast to what we are, yet travel on.”