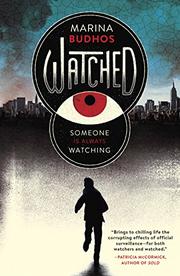 Naeem, a teenager living in an immigrant neighborhood in Queens, finds his grip on life slipping.

With his performance in school deteriorating, he feels unable to deal with the disappointment of his hardworking and hopeful Bangladeshi parents—and then there are the inquisitive eyes and mouths of their neighbors. Hoping to avoid them, Naeem keeps himself constantly on the move. But he is always aware that he is always being watched, by cops and by cameras placed all around. He’s taken small risks, but close calls have not been enough to deter him, until one day his past mistakes catch up with him and he has to make a choice between paying dearly or taking a deal the cops offer him: to become a watcher and help them spy on the people in his neighborhood. Having previously written about immigrant teens in Tell Us We’re Home (2010) and Ask Me No Questions (2006), Budhos again tackles identity and belonging or lack thereof, as well as Islamophobia and growing up under surveillance. It’s a slow story, appropriately filled with uncertainty. Action takes second place to a deeper message, and room is left for readers to speculate on the fates of certain characters.

While the absence of certainty may frustrate some readers, it also speaks to the underlying takeaway: you can never be sure what others’ intentions are, even if you have made it your job to study them.