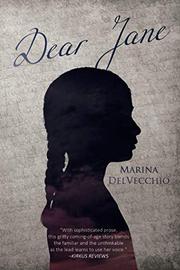 In DelVecchio’s debut, an adopted teenage girl haunted by her past finds solace in the pages of a classic novel.

Elektra Koutros was renamed Kathryn and nicknamed Kit Kat when she was adopted from Greece and sent to live with her new mother in Queens, New York. She has been looking for her true identity ever since. Her adoptive mother, Evangelia “Ann,” is a single Greek-American woman with no children of her own and a cold disposition. Her birth mother, Athanasia, was a prostitute. With the contrasting archetypes of the virgin and the whore for guardians, what Kit Kat longs for is a true mother figure. Instead, she finds Jane Eyre, the classic work of literature whose heroine becomes her confidante and role model. Via diary entries recounting her childhood through her college years, Kit Kat tells her story in an earnest—and very strong—narrative voice as she confesses her darkest secrets. Although Ann is a vast improvement over Athanasia, who used to beat Kit Kat, her denial of her adoptive daughter’s past creates a palpable distance between them. In one scene, Kit Kat sits at the dinner table so quietly she can hear Ann’s stomach digesting her food: “The silences between us are now immeasurable, but the sounds of her fill every crack, every possible place unoccupied by words.” Told from the teenager’s perspective, the story leaves Ann’s innermost thoughts unsaid, and the effect is haunting. Did she truly believe Kit Kat was lying about her past, or did she feel in over her head because the social worker had told her the situation was better than it was? Some of Kit Kat’s siblings—Maria, Nicholas, and Stavros—spent time in orphanages, the homes of relatives, and with Athanasia and her boyfriend, Kristos, but none of them followed her to America. She’s alone, angry, and, at one point, locked in the bathroom with a pair of scissors pointed at her own body. If her mother can’t break the silence, she’ll have to do it for herself.

With sophisticated prose, this gritty coming-of-age story blends the familiar and the unthinkable as the lead learns to use her voice.