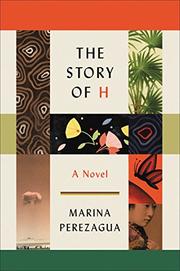 THE STORY OF H

An intersex woman joins an American ex-soldier in a search for his adopted daughter.

Perezagua’s new novel, her first to appear in English, is so strange it’s difficult to begin with a summary. Let’s say that it’s a blend of fiction and essay, and though it doesn’t really qualify as magical realism, it certainly isn’t just realism either. The book is narrated by H, an intersex woman who’d been a schoolboy in Hiroshima when the bomb fell. Along with everything else, she left her old identity behind. Now she’s with Jim, an American ex-soldier formerly stationed in Hiroshima. Jim is desperately searching for Yoro, the Japanese daughter he adopted after the war. Yoro disappeared on him, or was taken from him; in any case, H joins him in his search. H narrates their story in a circular, roundabout way, full of repetitions and asides—though it isn’t always clear where the asides end and the main story begins. Early on, H admits to a murder of some sort, circumstances unclear. She directs her story to an otherwise unnamed “sir,” an authority apparently in hot pursuit. It wouldn’t be fair to say that none of this is realistic—it isn’t meant to be realistic. But it isn’t believable, either, not even in its own weird world. H’s digressions become tiresome. Her sometimes-sanctimonious tone does, too. The novel apparently grew out of a short story. One gets the impression it would have been more successful shrunk down to its original size.

With a narrative style that quickly grows tiresome, this experimental novel never quite reaches emotional depth.