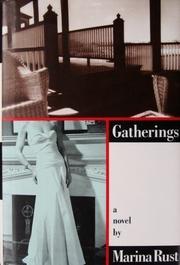 A debut from a graduate of the fiction school that teaches writers just to set it down without trying to sort it out first. That's what we have in this compilation of pieces of a woman's past—in a first novel by a great-great-granddaughter of Marshall Field. Happily, though, the character that Rust collects bit by bit is singular enough to warrant some attention, the daughter of a great American newspaper publishing family—the Frasers, originally of Chicago (indeed, one Fraser ancestress once found an Armour in her accustomed seat and told the proprietor of the establishment to ask the butcher's wife to leave). By 1985, however, to say, the Frasers aren't riding quite so high, though they still have a mansion in South Carolina, a New York duplex, and a ``cottage'' in Maine, among which young Meredith flits. She's the only child of Sarah Fraser, the family renegade who toted Meredith along for a stint at a hippie commune in Oregon (growing and grinding wheat, collecting magic mushrooms, etc.). Meredith's handsome, if terminally listless, cousin Pearce says she's turned out well despite it all, and toys with her quasi-incestuously. Meanwhile, Meredith goes to all the right schools, of course, then studies writing at Columbia while trying to figure out her family. Apparently, lunacy is big with the Frasers—debonair Uncle Harry died of a drug overdose, and Aunt Helen keeps trying to commit suicide. In the end, though, it looks as if Meredith will escape with her life and good sense intact—cousin Pearce may be another matter. An interesting context, and plenty of varieties of behavior. But there's precious little timbre to Meredith's voice and, for sure, no explanations.