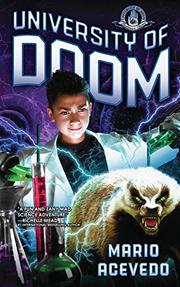 Acevedo (Rescue from Planet Pleasure, 2016, etc.) offers a middle-grade sci-fi adventure about talented father-and-son scientists who find themselves banished to the suburbs.

Thirteen-year-old Alfonso Frankenstein attends the Dr. Moreau Junior Academy, and his father, Dr. Eugino Frankenstein, teaches at the University of Doom. After creating a zombie badger in his Cadaver Recomposition class and setting off a cascade of animal reanimations, Alfonso tries to contact his father. He finds, unfortunately, that because of a “system quarantine” at the university, he can’t communicate with Dr. Frankenstein. He soon learns that his dad has been removed from the University of Doom for “nine counts of playing God”—despite the school’s motto of “LUDIMUS DEUS”: “We play God.” This forces the Frankensteins to move to a battered, split-level home in suburbia. The problems begin immediately when Sarah, a neighbor and Alfonso’s classmate at Ty Cobb Middle School, accidentally hits him in the face with a baseball—although the teenagers soon become friends. However, Alfonso also learns that Professor Moriarty, the family nemesis who orchestrated Dr. Frankenstein’s firing, has apparently followed them to their new home. At school, Alfonso must navigate a new world of bullies and boring assignments while keeping a lookout for the next phase of Moriarty’s vengeful scheme. In this feast of middle-grade weirdness, Acevedo caters to fans of smart, retro sci-fi; baseball; and, of course, gross-out horror. Crackling prose brings the various creatures to life—and often inventive death—such as zombies whose “Feathers and skin crinkled into ash and sloughed away, revealing flesh that glopped from skeletons.” The author maintains a youthful mindset when critiquing big ideas in science, such as the notion of human minds merging with the web: “Is that where they want to meld their consciousness?” comments Dr. Frankenstein. “With cheesy pop-up ads for easy credit and ring tones?” He even establishes a few new elements—such as Otis Carroll, librarian and intergalactic assassin—for use in a potential sequel. By the end, readers of all ages will definitely crave further adventures in this anything-goes world.

A zooming grand-slam of sci-fi fun.