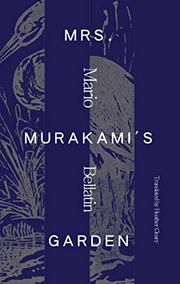 An allegorical novella challenges readers to connect the dots and fill in the blanks.

Though the narrative is short, there is plenty to unpack here as the Mexican-born avant-gardist Bellatin conjures an imaginary Japan where convention is under challenge. Institutions seem to be crumbling beneath their smooth surfaces, and marriage is one of them. Mrs. Murakami has all but lost her identity and personality after marriage, with most of the story detailing her formative years as the schoolgirl Izu. She was bright and independent, constricted by the customs concerning single women, beset by her father’s health and legal issues. As an art student, she finds herself unwittingly in conspiracy with a charismatic professor and the editor of an influential magazine. The professor assigns her to write an analysis of Mr. Murakami’s art collection, which turns out to be a somewhat disparaging appraisal, and the magazine’s director wants to publish it. “ ‘Finally, someone dared to unmask a fraud whose collection rests on obsolete criteria,’ ” the director says. Yet her visit with Mr. Murakami had left him smitten, and despite a chill in the relationship after her piece was published, they married. Even so, his collection had been discredited, and there were rumors of scandal, that he was connected to “a criminal network that purchased used underwear from students at various all-girls schools and sold them to wealthy men.” In marriage, the two seem to know little about each other and care less. His death leaves his wife all but destitute, though she still has her garden, which he continues to haunt. Following the frequently footnoted narrative, the text concludes with an addenda of 24 numbered items, questions, and considerations for the reader, including a potential plot twist that suggests that “the true motivations of the story’s protagonists will never be known.” Bellatin is a playful novelist who isn't trying to hold the mirror to reality, provide allegory or philosophy or life lessons, and reading this provocative novella makes one consider all sorts of assumptions about "why read?" and "why write?"

Fiction that explores not only what it means, but why it matters.