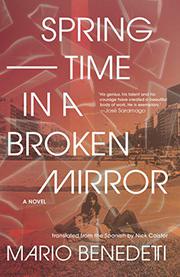 SPRINGTIME IN A BROKEN MIRROR

A military dictatorship fragments a family in this short novel by the late Uruguayan writer Benedetti (1920-2009; Blood Pact, 1997, etc.), originally published in 1982 and translated into English for the first time.

Santiago sits indefinitely in a Uruguayan prison because of his political activism while his wife, Graciela, and their 9-year-old daughter, Beatriz, have lived in exile for the past five years. He exchanges long letters with Graciela and thinks wistfully that “the only proof of god’s existence are Graciela’s legs.” Readers might wonder where he gets all the paper—the letters are that long—and nothing in them seems to catch the attention of the censors. Benedetti explores the pain of separation from loved ones, the mix of loneliness, hope and despair in a man who has no idea when he'll be released. Santiago's father, Don Rafael believes that memories of the family may be keeping his son alive. But the confinement will destroy what they have, because, as Graciela says, “The fact is, I don’t need Santiago anymore.” Prison changes both husband and wife, but her letters do not reveal that she has drifted out of love. Perhaps, she thinks, she is falling in love with Santiago’s best friend and fellow leftist, Rolando. She daydreams only of Rolando but she can’t bring herself to break the news to Santiago while he is still in prison, as it would destroy him. “I still love him as a wonderful friend,” she confides to the sympathetic Don Rafael, “a comrade whose behaviour has been beyond reproach.” The language is often beautifully expressive, as when Don Rafael reflects that one day his son “will have to see Graciela through the bars of another man’s love.” Beatriz adds her own childlike insights, perhaps reflecting a cognitive disability, noting for example that “freedom is a huge word” that “means many things” such as liberty, but her father is at Liberty Prison, which confuses her. One day Uruguay will be transformed, Don Rafael believes, “born in the backroom of the forbidden,” but “we’ll never again be what we were.” This powerful novel evokes the works of Gabriel García Márquez.