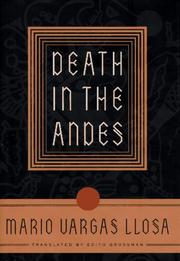 DEATH IN THE ANDES

An impressive panoramic portrayal of his native country is created with masterly economy in this intriguing political detective story by the celebrated Peruvian author (In Praise of the Stepmother, 1990; the autobiography A Fish in the Water, 1994, etc.). The story details the investigation performed in a remote Andean territory by two government Civil Guard officers: weary, cynical Corporal Lituma (who appeared in Vargas Llosa's Who Killed Palomino Molero?, 1987) and his young adjutant, Tomas Carreo. Three men have mysteriously disappeared and are presumed murdered. Suspicion falls initially on the Marxist Shining Path guerrillas, whose terrorist activities range from disrupting a star-crossed highway project to stoning innocent tourists to death. But Lituma also suspects a putative local "witch" and her Falstaffian husband (pointedly named Dionisio), rumored to practice both cannibalism and human sacrifice. The novel rockets energetically from one scene and set of characters to another, powered by Vargas Llosa's distinctive structural device: A story told by one character to another simultaneously presented through authorial omniscience in the present-tense. The guerrillas are observed from outside, and they prove all the more menacing and mysterious for that. Several subplots linger hauntingly in the memory, most notably those involving a woman environmentalist whose devotion to a variously funded reforestation plan brands her as an "intellectual who betrays the people," and a gentle retarded man who watches with horror as a herd of the vicueas he protectively tends is, for ostensibly political reasons, slaughtered. The vigorous, fractious narrative is skillfully unified by a painstakingly rendered contrast between its two major characters: Lituma's profane testiness is oddly engaging, as is his moonstruck partner's romantic fixation on a thug's mistress who has more than one surprise in store for her hopeful young lover. A terrific novel: dramatic and varied, rich in incident, characterization, and atmosphere, and disturbingly forthright in its political and human implications. One of Vargas Llosa's best books in years.