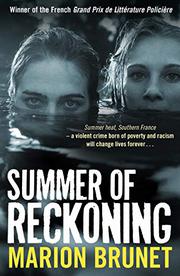 by Brunet ; translated by Katherine Gregor

YA author Brunet’s first adult novel and first appearance in English, winner of the 2018 Grand Prix de Littérature Policière, chronicles the fateful summer when the world of a pair of Provencal schoolgirl sisters is detonated from within.

Once she realizes that she’s pregnant, Céline Gomez  knows she can’t expect help from her father, Manuel, the boss of a construction crew whose first impulse, as usual, is to beat her; or from her mother, Séverine, who bore Céline herself as a teenager and can’t get over the fact that her daughter is repeating her mistake; or from the teachers and classmates who stand by ready to judge her; or from the attractive man who fantasizes about photographing his seduction of a pregnant teen. The only person who’s supportive is her plain-Jane sister, Johanna, who’s always looked out for Céline even though she’s a year younger than her beautiful sister. As the summer months swell Céline’s belly and test the bond between the sisters, Manuel, taking his daughter’s disgrace as only the latest setback in a life full of them, seethes because he can’t identify the father. Then one night, while his daughters are at a party their mother has forbidden Céline from attending, he suddenly has an opportunity to take terrible revenge on the man he thinks is responsible. As his old mate and co-worker Patrick Bardin stands by in horror, he drunkenly, methodically beats the man to death and works feverishly to hide his body. Manuel’s choice of victim couldn’t be more ironic, and the murder is both shocking and inevitable. Even more ironic is the sequel, which finds Céline being rushed to the hospital months before the baby is due, Séverine telling off the social worker who’s been sent to help Céline, and the family proceeding very much as before, but now laden with an intolerable burden of guilt and shame.

A slow-motion nightmare notable for its evocation of febrile adolescent fantasies whose power extends well into adulthood.