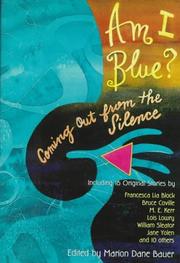 Coming Out from the Silence

When gay and lesbian adults write about their youthful struggles to come to terms with their gayness, they frequently lament that there was little in books to help them understand their sexuality and accept themselves. In contrast, these stories by 16 luminaries of YA literature will help such young people realize that they are not alone, unique, or abnormal in their sexual orientation. The viewpoint here is sometimes that of a gay protagonist, sometimes that of someone whose life has been affected by a gay person. Bruce Coville's title tale of a modern fairy godfather is wonderfully campy and humorous; in Francesca Lia Block's ``Winnie and Teddy,'' a young man comes out to his girlfriend; in James Cross Giblin's ``Three Mondays in July,'' a young man's chance encounter with an older one turns his life around; Lois Lowry's ``Holding'' depicts a boy whose life has been a lie because he couldn't acknowledge his father's gayness; and the editor tells a delightful tale (``Dancing Backward'') of two young lesbians reacting to the rigid orthodoxy of a Catholic boarding school. Many of the other stories—which include entries by M.E. Kerr, Jacqueline Woodson, Jane Yolen, and William Sleator—are equally fine. Each is followed by comments by the author on his or her life and writing; these can be as interesting as the stories themselves. A book that belongs in every YA collection. (Fiction. 12+)