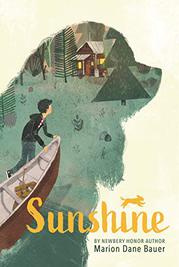 When Ben was just 3, his mother abandoned him and his father.

Now the boy is to spend a week with her on an extremely isolated island in a lake on the Minnesota-Canada border. Fortunately, he has his golden-red dog, Sunshine, to accompany him. His pragmatic dad says he’s far too old for an imaginary pet, but Sunshine is what keeps this “what-if kid,” as his father calls him, safe. She pushes his fears down as Ben and his mother paddle across one lake and then another to reach her cabin. Although Sunshine attacks a bear and her cub that his mom takes them to see, they come through the danger unscathed. It’s only after he takes the canoe and nearly fails to paddle back against a driving wind that he recognizes Sunshine’s shortcomings. Without the dog’s support, he finally confronts his mother about what he believes he did to drive her away when he was a toddler. Then he learns the crushing truth: that, after the damage of her own abusive upbringing, she feared she would hurt him. A terrifying fire on the island forces him to courageously help his mother and eventually come to grips with both her flaws and his. Richly character driven, immersive, evocative, and painfully sad, this effort can’t fail to move young readers. Ben and his family seem to be White.

An outstanding exploration of childhood trauma from a masterful author.