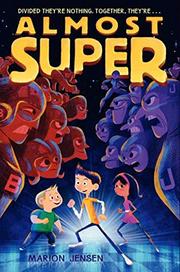 Inventively tweaking a popular premise, Jensen pits two Incredibles-style families with superpowers against each other—until a new challenge rises to unite them.

The Johnsons invariably spit at the mere mention of their hated rivals, the Baileys. Likewise, all Baileys habitually shake their fists when referring to the Johnsons. Having long looked forward to getting a superpower so that he too can battle his clan’s nemeses, Rafter Bailey is devastated when, instead of being able to fly or something else cool, he acquires the “power” to strike a match on soft polyester. But when hated classmate Juanita Johnson turns up newly endowed with a similarly bogus power and, against all family tradition, they compare notes, it becomes clear that something fishy is going on. Both families regard themselves as the heroes and their rivals as the villains. Someone has been inciting them to fight each other. Worse yet, that someone has apparently developed a device that turns real superpowers into silly ones. Teaching themselves on the fly how to get past their prejudice and work together, Rafter, his little brother, Benny, and Juanita follow a well-laid-out chain of clues and deductions to the climactic discovery of a third, genuinely nefarious family, the Joneses, and a fiendishly clever scheme to dispose of all the Baileys and Johnsons at once. Can they carry the day?