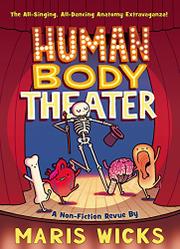 A theatrical introduction to human anatomy, as well-choreographed as it is informative.

In 11 “Acts” hosted con brio by a skeletal impresario (“Bring out the lungs!”), Wicks parades a revue of body systems across a curtained stage. It’s a full program, with a teeming supporting cast from Dopamine to Diaphragm, Golgi Body to Gastroenteritis joining more-familiar headliners. The presentation opens with a zoom down to the cellular and even molecular levels to lay foundations for later macro and micro views of digestion, infection, and disease. Following this, the five senses (only five), the “dance of the oxygen fairies,” allergic reactions, and other anatomical processes that make up each system’s major components, most sporting cheery emoji-style faces, expressively demonstrate their respective functions. The reproductive system’s named parts deliver a frank but visually discreet turn with descriptions of erections and fertilization but no direct depictions, and it stops with the onset of puberty. The performances are enhanced by labeled diagrams, pitches on relevant topics from the importance of immunization and proper nutrition to synonyms for “fart,” and lists of important words and further resources. A few miscues aside (no, the speed of sound is not invariant), it’s a grand show, with a logically placed intermission following a peek into the bladder and a literal “wrap” at the end as the emcee puts herself together from inside out.

It’s a lot to take in at one sitting, but this anatomical extravaganza really gets to the heart of the matter. Not to mention the guts, nerves, veins, bones….