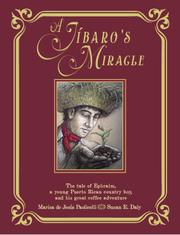 A gift of coffee beans helps a Puerto Rican boy rise from peasant to hacienda owner in this children’s book.

After his father’s death, 12-year-old Ephraim Montalvo helps support his mother by picking coffee cherries for the Hacienda Dominicci. Much hard work has enabled Ephraim to pay off his father’s debt to Mr. Dominicci, money Mr. Montalvo had hoped to use for his own plantation. Ephraim finishes repayment, but his cheerful nature is crushed when the hacienda owner contemptuously refuses to acknowledge this, and it seems he and his mother will always be trapped in poverty. Seeing her son’s despair, Mrs. Montalvo gives him an encouraging letter and a book on the history of coffee left to him by his father. Soon after, Ephraim meets a mysterious coffee trader named Amal, who gives him some magic coffee beans that miraculously grow overnight into many mature trees. Ephraim realizes his father’s dream and starts his own hacienda that becomes so successful that he soon travels to Europe for a coffee contest. When Ephraim’s ship is attacked by pirates, he must face danger and make deals to survive. He graciously reconciles with Mr. Dominicci, who admits his sins and becomes a force for good in his community. Supplementary information includes a glossary, map, and historical photographs. In some ways, Paolicelli (Lightkeepers to the Rescue!, 2012, etc.) tells a classic tale of the poor boy who advances through sweat, honesty, and faith, with a supernatural twist coming from the miraculous coffee beans. It’s a touching story that emphasizes family, generosity, and other virtues, and it can get a little didactic. Ephraim is sometimes too saintly to be true, but there’s enough excitement—especially in the pirate action scenes—to keep the story dynamic and fresh. Young readers have a chance to learn about coffee and its history, the hacienda system and jíbaros (peasants), Puerto Rico, and Caribbean piracy. The book is attractively presented and thoughtful, featuring a burlap background for many of Daly’s (Lightkeepers to the Rescue!, 2012) expressive, lively illustrations in charcoal and pencil.

An entertaining, heartwarming coming-of-age story with a Puerto Rican flavor.