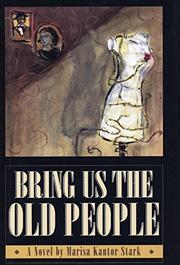 BRING US THE OLD PEOPLE

A first novel by a New York—based poet and story writer that doesn—t leave the reader waiting for more. Stark’s a grimly derivative tale of the Holocaust is recounted in the first person by Maime, a nonagenarian Polish Jewish woman who survived the war by hiding in a series of farms owned by sympathetic Gentiles. At the outset, Maime is living in a residence for the elderly, bitterly resentful of her nephew’s apparent largesse, and eager to tell of her life in Poland before and during the war (although it’s unclear to whom she’s speaking). Her marriage at 16 to Saul is a mistake; she’s too young, and he turns out to be sterile. There is tension between her and her mother-in-law, and she misses her adored parents. When the Nazis come, everything falls apart around her: she’s left with little more than a cache of American dollars, the will to survive, and a terrible secret. This secret, which might have served as the pivot of the entire narrative, is telegraphed by the book’s title, again in its first chapter, and is mentioned throughout. Worse still, it is first revealed almost in passing, tossed off in the context of a conversation between Maime and her sister, who spent the war years in New York. By the time the events in question are laboriously replayed, the reader has long since ceased to care. There is virtually nothing original here: the situations, the characters, the historical events, all have been used dozens of times before to greater effect. Stark’s slender volume rambles like the recollections, indeed, of an elderly person; the diction is a grotesque parody of a Polish Jew’s broken English. One hesitates to dismiss a book as sincerely meant as this one, but as literature it’s a void.