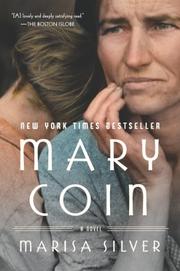 The fictionalized lives of photographer Dorothea Lange and the Native American farm worker behind her famous Depression-era portrait “Migrant Mother.”

While adhering closely to the facts of the real women’s lives, Silver (The God of War, 2008, etc.) renames them—Lange becomes Vera Dare; her subject, Florence Owens Thompson, becomes Mary Coin—and frames their stories within a wholly fictional conceit: Social historian Walker Dodge is grappling with his role as a divorced father when he begins researching the history of his family, successful California fruit growers, after the death of his uncommunicative father. Walker, who coincidentally teaches college students how to look at photographs, opens and closes the novel in 2011, but the real focus is on the two women. Mary grows up on an Oklahoma farm, raised by her tough but loving Cherokee mother after her alcoholic white father’s death. At 17, she marries Toby Coin, and they head to California where he works in sawmills and she has one baby after another. By 1929, a fire has burned down the mill and their home. After Toby dies, Mary picks fruit to support her children. After an affair with a farm owner’s son, she has another baby that she is nursing near her broken-down car the day in 1936 when Vera Dare takes her picture. Vera, who still limps from the polio she suffered as a child, has spent the 1920s in San Francisco as a society photographer. Her financial security has collapsed by the early 1930s, along with her marriage to a flamboyant, womanizing painter. By the time she runs across Mary, Vera has farmed out her two sons to travel the countryside taking pictures to document rural poverty for FDR’s Resettlement Administration. When she photographs Mary, Vera has no idea the image will take on a life of its own.

Walker’s tacked-on connection to the photograph seems a calculated attempt to add sexual intrigue to what is otherwise a disappointingly plodding account that sheds no new light on either the photographer or her subject.