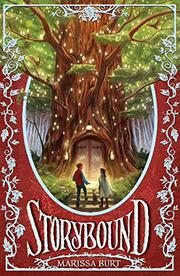 A 12-year-old girl finds herself to be an illegitimate visitor to the land of Story in this debut middle-grade fantasy.

While in the basement of her school library, foster child Una Fairchild stumbles into a tale all about herself and a world where people practice to be characters in books—hero, villain or sidekick. When Una discovers that she has only been “Written In” to their universe for some mysterious reason, making her very existence precarious, a tumult of clandestine and protective activity ensues. Along the way she befriends a compassionate boy named Peter and an erratic girl named Snow. Meanwhile, Talekeepers spy, Muses are stifled and the Enemy lurks. Books and their supporters are in danger at every turn. In this allegory told by an omniscient narrator, the proceedings are often heavy-handed, and the limited character development can make it challenging to care about the fates of all involved. Yet readers who love fantasy may see an opportunity to snuggle up with a cup of cocoa and unravel the plot, which twists and turns in on itself, with happy surprises.

While the novel doesn’t reach the heights to which it clearly aspires—Harry Potter, Inkheart, A Wrinkle in Time—its high concept could have cinematic potential, with deeper character development and less contrivance.