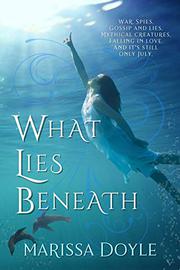 When the United States enters World War I in the spring of 1917, Malcolm’s father doesn’t want him shipping off to Europe like many of his Harvard classmates. Instead, he arranges with the captain of the naval air station near the hotel the family runs that Malcolm will lead ocean patrols looking out for U-boats. Malcolm and his family are the only selkies—human/seal changelings—in the area who spend most of their time on land. Meanwhile, with her own father doing secret work in Washington, D.C., 17-year-old Emma longs for war work more pertinent than bandage-rolling. But she’s shuttled to her grandmother’s house on Cape Cod, which she hasn’t visited since her mother died giving birth to her there, and endures bandage-rolling—with a side of nasty gossip. Swimming lessons with Malcolm take her mind off her concerns, as does dodging the affections of another young man, local dilettante George. Then Malcolm tells her a story that can’t be true....Doyle deftly places fantasy elements in a historical setting that sometimes feels a bit too modern, but as it’s all so enjoyable, no one will really care. Malcolm’s selkie sisters add depth to the story, not being human to the degree he is. Malcolm and Emma are appealing characters, and their sea-crossed romance keeps readers turning pages. Everyone in human form is White.