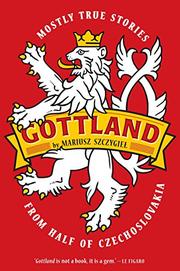 Mostly True Stories from Half of Czechoslovakia

Winner of the 2009 European Book Prize, acclaimed Polish journalist Szczygiel’s well-researched, unsunny volume of “mostly true stories” forms an indelible impression of the Czech population. His glimpses encapsulate the struggles of these hardscrabble citizens prior to the nation’s liberation in 1993, with strength and resilience as the operative themes threaded throughout. The sweeping opening biography focuses on the rise of innovative Czech entrepreneur Tomas Bata, who revolutionized the shoe manufacturing business using the Henry Ford assembly-line production model. The author also profiles the tangled life of actress Lida Baarova, who, for two years during her early 20s, became the mistress of Joseph Goebbels, the “Minister of Propaganda” for Hitler's National Socialist government. Also of note are creatively drawn portrayals of struggling pop singer Marta Kubisova, whose songs were censored and removed from public consumption, and a poignant report on the life of teenage Prague student Zdenek Adamec, who became increasingly appalled by the conditions in the Czech Republic and committed public suicide by self-immolation. Szczygiel explores the communist takeover of Czechoslovakia in searing pieces revealing the true extent of the mass liquidation of “anything that brings simple pleasure” to the public. The author also offers an inventive take on the metamorphosis of the “Cubist personality” of provocative writer Eduard Kirchberger into pseudonym “Karel Fabian.” All of these congruous pieces create a patchwork tapestry of Central European history. Whether chronicling the sculpting of Prague’s monument to Joseph Stalin or the dubious allegiances of writer Jan Prochazka, the atmosphere Szczygiel evokes is glumly foreboding yet intensely interesting.

A controversial, insightful work from Poland’s 2013 journalist of the year.