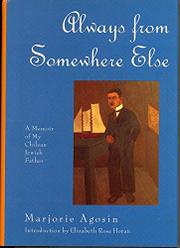 ALWAYS FROM SOMEWHERE ELSE

A Memoir of My Chilean Jewish Father

Using a series of brief, fragmented descriptions, Agos°n (who edited What Is Secret: Stories by Chilean Women, 1996, and other volumes) reconstructs the wanderings and difficulties of her family Agos°n’s grandparents, a tailor and a cigarette-roller, began their travels at the beginning of this century when they fled Russia for Istanbul to escape anti-Jewish pogroms. From Istanbul, they moved with their children to Marseilles in France, where Agos°n’s father was born, before sailing to Chile, where they hoped to escape poverty with the help of a relative who ran a successful business in Valparaiso. Once in Chile, the family settled in Quillota; they were the only Jewish family in the small town. Despite their attempts to assimilate (Agos°n’s grandfather gave up speaking Russian and her grandmother would only light the Sabbath candles after all the windows in the house had been covered with wrapping paper), Agos°n’s father MoisÇs was always considered an outsider. Excluded from the private schools of the upper and middle classes, MoisÇs went to the public school and eventually left Quillota to study medicine. But even as a university doctor in Santiago, MoisÇs continued to encounter anti-Semitism. In 1968, student protests and slanderous newspaper articles forced him to close his prestigious research labs. Shortly thereafter, he moved his family to Athens, Ga., never to return to Chile. Though Agos°n’s complicated family history is a worthy subject for a memoir, her melodramatic, overly sentimentalized writing robs the story of its power. Agos°n continually casts her family as saints in a sinning world—apparently they never fought, never had a character flaw. The result is that, though the prejudice her family encountered was deplorable and undeserved, Agos°n’s black-and-white portrayal makes the history of their difficulties ring hollow, the stuff of allegories and fairy tales, not real life. (16 b&w photos, not seen)