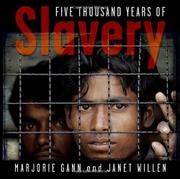 Sandwiched between telling lines from the epic of Gilgamesh (“…the warrior’s daughter, the young man’s bride, / he uses her, no one dares to oppose him”) and the exposure of a migrant worker–trafficking ring in Florida in the mid-1990s, this survey methodically presents both a history of the slave trade and what involuntary servitude was and is like in a broad range of times and climes. Though occasionally guilty of overgeneralizing, the authors weave their narrative around contemporary accounts and documented incidents, supplemented by period images or photos and frequent sidebar essays. Also, though their accounts of slavery in North America and the abolition movement in Britain are more detailed than the other chapters, the practice’s past and present in Africa, Asia and the Pacific—including the modern “recruitment” of child soldiers and conditions in the Chinese laogai (forced labor camps)—do come in for broad overviews. For timeliness, international focus and, particularly, accuracy, this leaves Richard Watkins’ Slavery: Bondage Throughout History (2001) in the dust as a first look at a terrible topic. (timeline, index; notes and sources on an associated website) (Nonfiction. 11-14)