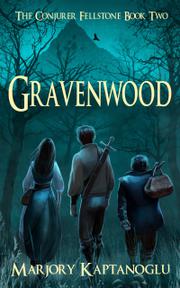 Three heroes seek an artifact that will reverse the effects of harmful magic in this medieval YA fantasy sequel.

Following the events of Dreadmarrow Thief (2017), teenage Tessa Skye of Sorrenwood is under a spell of subservience and engaged to Lord Turth of Turthville as the new Lady of Fellstone Castle, where she now lives. Meanwhile, her friend Calder Osric lives with and watches over Tessa’s mother, Faline, outside the castle; she still believes herself to be a sparrow after having used the windrider amulet to change between human and bird forms. When Tessa stops visiting her mom—and doesn’t invite her to the wedding—Calder sneaks into Fellstone to investigate. He convinces the sexton’s son, Ash Kemp, who loves Tessa dearly, to help him break Turth’s hold on the girl. A blow to the head frees her, and the three ride to Blackgrove to ask the Conjurer Lord Queshire for assistance in opening the locked Conjurer’s Book of Incantations. The book, Tessa hopes, contains a way to cure her mother. In Blackgrove, Queshire instructs them to find the Gravenwood, an engraved tablet that can “undo the effects of a magical spell” and allow “someone with no conjuring ability to steal the powers of a conjurer.” Tessa agrees on the condition that Queshire train her in conjuring—and therefore the manipulative statesman has the desperate heroes right where he wants them. After a brief setup, Kaptanoglu puts her heroes straight through the wringer in this sequel; Tessa, Calder, and Ash are later separated and must survive imprisonment, pirates, and conniving relatives. Ash's and Calder’s chapters are written in the third person, but it’s Tessa’s first-person chapters that truly shine. While she’s under the spell, for instance, she notes at dinner that Turth’s “scent was intoxicating, though the nearby platter of bacon might’ve had something to do with it.” Calder faces a deep emotional quandary because he fears that Faline won’t need him once she’s cured. An eleventh-hour twist emphasizes the elegance of Kaptanoglu’s plotting, and the final line will make readers eager for the next volume.