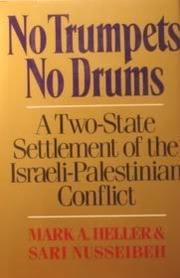 NO TRUMPETS, NO DRUMS

A Two-State Settlement of the Israeli-Palestinian Conflict

by Mark A. Heller & Sari Nusseibeh

Nicely balanced, thoughtful blueprint for defusing a volatile component of the Middle East powder keg, from the unique perspective of a collaboration between Israeli and Palestinian scholars. Opting for ``the logic of interests and necessity rather than of rights and desires,'' Heller, a researcher in strategic studies at Tel Aviv Univ., advances the ideas of his earlier A Palestinian State (1983) by hammering out concrete proposals for Israel- Palestine coexistence in partnership with Nusseibeh, a philosophy instructor at a West Bank university. Refreshingly (and realistically), the authors avoid utopian or sentimentalized views- -each, in fact, concedes that he (like most members of the two groups) would prefer the entire piece of land, but agrees that sharing offers ``the only chance for a stable peace.'' Their alternative, or ``least undesirable choice,'' is a two-nation setup roughly adhering to the ``Green Line'' (the 1949 boundaries), with the Palestinian state located in the separate areas of the West Bank and Gaza. Among the essential preconditions addressed here are workable solutions to such major issues as mutual security and verification, borders, refugees, water rights, and the status of Jerusalem. Included is an intriguing picture of Jerusalem as a virtual city-state, part of Israel but administered by independent Palestinian and Israeli municipal councils, each serving its respective constituency—a scheme that the authors believe will allow each nation to fulfill its goal of establishing the city as its capital. Daring in its reliance on reason and cooperation as an antidote to the usual hysteria.