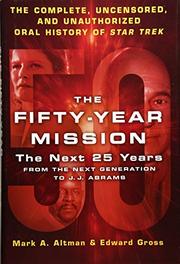 The Next 25 Years: From The Next Generation to J.J. Abrams: The Complete, Uncensored, and Unauthorized Oral History of Star Trek

by Mark A. Altman & Edward Gross

The oral history of the Star Trek franchise boldly continues.

Writer and producer Altman and Gross (Voices from Krypton: Superman on Film and in Comics, 2015, etc.), who did a terrific job in their first volume, have once again meticulously selected and chronologically arranged a massive number of comments from more than 200 people involved in the TV shows and movies. This book takes us through the many iterations of Star Trek since The Next Generation premiered in 1987. When Gene Roddenberry was approached to do it, “I turned them down….I really feared doing it until I got angry enough to try.” When producer Robert Justman said he wanted Patrick Stewart to play the captain, Roddenberry responded, “Jesus Christ, Bob, I don’t want a bald man.” He later changed his mind and was glad he did; as Justman noted, Stewart was everything “a captain ought to be.” The tenth ST movie, Nemesis, with The Next Generation crew, was a huge failure. Actress Marina Sirtis (Deanna Troi) said director Stuart Baird “was an idiot.” There was trepidation about ever trying a ST movie again, but J.J. Abrams, who was not a huge ST fan in the beginning, was approached to do another film. His thinking was, “you would have to do it in such a way that it would bring it to life in a way that never had been done before.” He felt the characters of Kirk and Spock were the keys: get them right and it could work. It did. His second try, Into Darkness, went “further than the first movie in every way.” Trekkies’ appetite for all things ST will be sated this summer with Star Trek: Beyond, directed by Justin Lin (The Fast and the Furious). Actor Chris Pine (Kirk) says it’s a “close-up look” at the crew. A new TV series launches in 2017.

Is too much of a good thing bad? Not when it’s Star Trek.