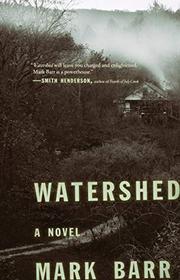 Barr’s debut novel examines lives in a rural Tennessee town in the 1930s and the way things changed when the government’s program to bring electricity to the region butted up against local suspicions and attitudes. Nathan, an industrious engineer and newcomer from Memphis, seizes the opportunity to remake himself through stellar performance on a dam job site while concealing the circumstances of his past. Claire, a young wife and mother, discovers that her ne’er-do-well husband, Travis—a laborer at the dam site—has given her a sexually transmitted disease, the result of a dalliance with a local prostitute. Claire’s resultant escape from the demeaning conditions of her confined life leads her to relocate to her Aunt Irma’s boardinghouse, where she encounters Nathan as well as other out-of-towners (all men) who have descended upon the region as part of the government’s effort to improve the area via hydroelectric power. The efforts taken by Nathan and Claire to reinvent themselves reveal personal strengths, and longings, they had never suspected. There are appearances by stock characters (including a “city slicker” and a roughneck with a heart of gold), and some scenes may appear stereotypical (including outhouses, dogfights, and moonshine), but the level of detail Barr provides shields the book against condescension and argues in favor of researched reality. Lyrical descriptions of the Tennessee landscape contrast vividly with the harsher reality of day-to-day life in a region and time almost exotic in its isolation.

Barr sheds light on a unique episode in American history while illuminating the stories of two sympathetic characters.