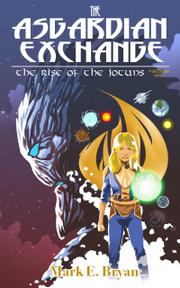 The Rise of the Jotuns

This YA fantasy debut finds a teenager imbued with the power of a goddess from Norse mythology.

In Wreathen, Delaware, 13-year-old Amanda West is about to enjoy a winter field trip with her history class. She boards the bus and runs into bully Laurie Gellar. When the petty Ms. Biggs, a history teacher, tries to check Amanda’s permission slip, the girl finds it’s missing. She spies Laurie tossing the wet slip out of the bus window, but Ms. Biggs won’t hear any excuses. Amanda misses the trip, and her parents keep her home from the town’s Winter Festival for being so unruly. Luckily, Amanda’s classmate and best friend, Jack Isen, skips the field trip to cheer her up. As they build a snow spider outside, strange creatures appear. They are led by Bergelmir, Lord of the Frost Jotuns (or giants), who refers to Amanda as “Favoured.” This means that she’s been selected to channel the “magick” of an Asgardian deity while a spell by the Norns (Norse goddesses of Fate) quells the fires of Ragnarok. Yet the Jotuns can’t kidnap Amanda once the heroic Lady Freyja joins the battle. The goddess spirits Amanda off to Asgard on a rainbow bridge, where she learns that her patron deity is none other than Sigyn, Loki’s wife and traitor to the realm. Bryan’s series opener brings Norse mythology to a Harry Potter–style school environment. And where Marvel’s Thor comics and films cherry-pick Asgardian lore, here readers get a much denser experience. Even Ginnungagap, the void in which the Nine Realms were born, is mentioned. Strong characters like Cassie, Amanda’s fellow Favoured, guide the protagonist when her parents are transformed into mice and Jack has been taken by Bergelmir. A larger mystery shapes up as harmful “alfblot,” or Fell Elf magick, begins appearing in Asgard. Amanda’s temptation to reach out to the imprisoned Sigyn is an intriguing plot driver. Eventually, the fantasy staple of a powerful ring, in this case, Draupnir, comes into play. A game-changing final moment will energize fans for the sequel.

A methodically complex series opener that should satisfy Hogwarts fans.