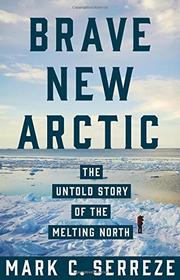 Documenting the connection between unprecedented ice-melting in the Arctic and climate change throughout the world.

Climatologist Serreze (Geography and Environmental Sciences/Univ. of Colorado; co-author: The Arctic Climate System, 2006), who directs the National Snow and Ice Data Center, makes frequent trips to the Alaskan and Canadian Arctic. In his latest book, he combines advocacy, tales of his personal experiences in the far north, narratives from other climate scientists, and explanations of how sound science functions. The author shares the story of how he entered the field of climate science by accident; why, at first, he thought the climate might be getting colder rather than warmer, based on measurements from complicated Arctic weather systems; how, year after year, he became further convinced about the reality of global warming due to slowly accumulating data; and why he began to participate avidly in a scientific consensus combating climate-change deniers, most of whom have been politically motivated. Ultimately, what Serreze produces is a kind of detective story; the major crime is the human causation of global warming. The clues, however, are often presented through highly technical data, meaning general readers must labor to understand the terminology underlying those clues. Ultimately, the evidence becomes clear—in part due to Serreze’s repetition—that Arctic ice is shrinking in mass, thus warming the ocean, and that the ice in Greenland is rapidly melting, thus raising sea levels in dangerous ways. Furthermore, the permafrost traditionally covering Arctic ground is warming and thawing. All of these factors contribute greatly to global warming. In fact, notes the author, new warming records are being established nearly every year. The author believes the only solution is reducing greenhouse gas emissions, but even that difficult task will result in only modest positive change at this juncture.

An alarming, evidence-based book by a scientist who is not by nature an alarmist.